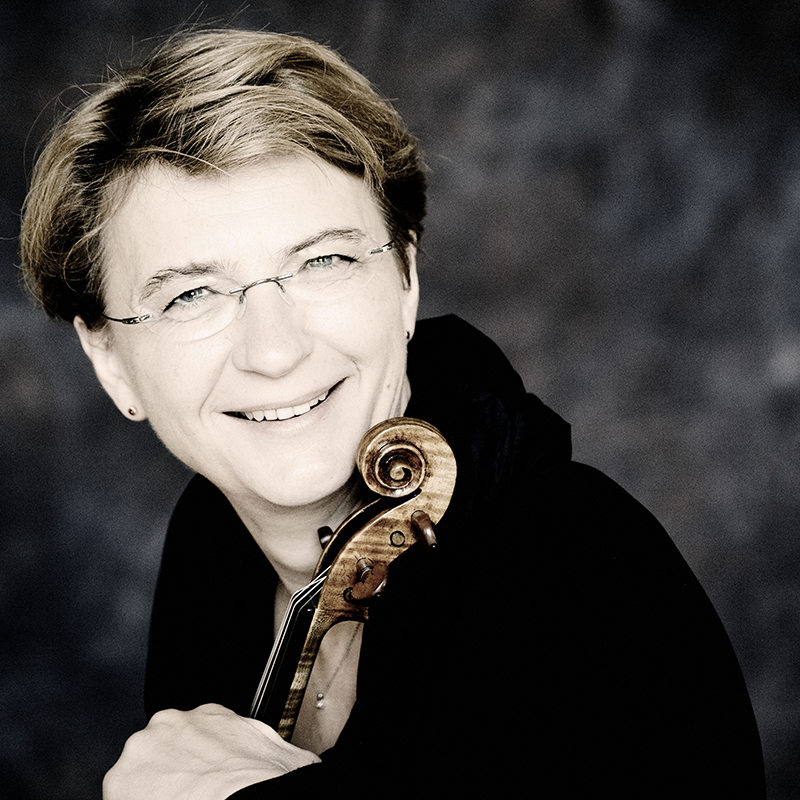 Brimful of energy, Antje Weithaas’ brings her compelling musical intelligence and technical mastery to every detail of the music. Her charisma and stage presence are captivating, but never overshadow the works themselves. She has a wide-ranging repertoire that includes the great concertos by Mozart, Beethoven and Schumann, new works such as Jörg Widmann’s Violin Concerto, modern classics by Shostakovich, Prokofiev, Ligeti and Gubaidulina, and lesser performed concertos by Hartmann and Schoeck.

As a soloist, Antje Weithaas has worked with most of Germany’s leading orchestras, including the Deutsches Symphonie-Orchester Berlin, Bamberg Symphony and the major German radio orchestras, numerous major international orchestras such as the Los Angeles Philharmonic, San Francisco Symphony, Philharmonia Orchestra and the BBC Symphony, as well as and the leading orchestras of the Netherlands, Scandinavia, and Asia. She has collaborated with the illustrious conductors Vladimir Ashkenazy, Dmitri Kitayenko, Sir Neville Marriner, Marc Albrecht, Yakov Kreizberg, Sakari Oramo and Carlos Kalmar.

Antje Weithaas kicks off the 2020/21 season with the Kammerakademie Potsdam and a strong focus on Beethoven, playing his Violin Concerto in Bremerhaven, Potsdam, Schwerin, in her debut concert with the Taiwan Philharmonic Orchestra (play-lead) and with the Badische Staatskapelle Karlsruhe in the first concerts with their new Music Director Georg Fritzsch. She works closely with Marie-Elisabeth Hecker and Martin Helmchen, with whom she has been invited to play Beethoven’s Triple Concerto with the Orchestre Philharmonique de Monte Carlo and the Philharmonia Orchestra London. Other highlights of the season include performances with the Residentie Orkest Den Haag under Jun Märkl and Antony Hermus (Mozart and Mendelssohn), with the MDR Symphony Orchestra under Karl-Heinz Steffens (Brahms), with the BBC Scottish Symphony Orchetra under Anja Bihlmaier (Berg) and the Jerusalem Symphony Orchestra under Antony Hermus (Sibelius). In the chamber music realm, she continues a new musical partnership with harpsichordist Mahan Esfahani in concerts at the Alte Oper Frankfurt and the Schwetzingen Festival.

Through her infectious zest for communication, Antje Weithaas‘ reputation for inspiring play-lead concerts is rapidly growing. Having been the Camerata Bern’s artistic director for almost ten years, she was responsible for the ensemble’s musical profile, leading large works such as Beethoven’s symphonies, and recording music by Tchaikovsky, Brahms, Mendelssohn and Beethoven. She will continue this close collaboration in the 2019/20 season and will also work with the Amsterdam Sinfonietta and the Leopoldinum Chamber Orchestra, amongst others.

In May 2018, her musical versatility was showcased through an artistic residency at the Schwetzingen SWR Festival. The Arcanto Quartet, in which she performed with fellow violinist Daniel Sepec, violist Tabea Zimmermann and cellist Jean-Guihen Queyras, has been particularly important to Antje Weithaas as a chamber musician. They have released CDs on the label Harmonia Mundi of works by Bartók, Brahms, Ravel, Dutilleux, Debussy, Schubert and Mozart.

Antje Weithaas produced a reference recording of Beethoven and Berg’s violin concertos in 2013 with the Stavanger Symphony Orchestra under Steven Sloane (CAvi-music). The label cpo released her recordings of Max Bruch’s complete works for violin and orchestra with the NDR Radio Philharmonic under Hermann Bäumer to great acclaim. There were rave reviews for Antje Weithaas’ project for CAvi, the complete recordings of Johann Sebastian Bach’s solo sonatas and partitas and Eugène Ysaÿe’s solo sonatas. Two CDs were released in 2019: a recording of the violin concerto by Robert Schumann and the double concerto by Johannes Brahms with the NDR Radiophilharmonie, cellist Maximilian Hornung and conductor Andrew Manze, and a recording of the violin concerto and concert rhapsody by Khachaturian with the Staatsorchester Rheinische Philharmonie and conductor Daniel Raiskin.

Antje Weithaas began playing the violin at the age of four and later studied at the Hochschule für Musik “Hanns Eisler” Berlin with Professor Werner Scholz. She won the Kreisler Competition in Graz in 1987 and the Bach Competition in Leipzig in 1988, as well as the Joseph Joachim International Violin Competition Hanover in 1991. Together with Oliver Wille, she recently took over the artistic leadership of the renowned Joachim competition. After teaching at the Universität der Künste Berlin, Antje Weithaas became a professor of violin at the Hochschule für Musik “Hanns Eisler” in 2004. She plays on a 2001 Peter Greiner violin.